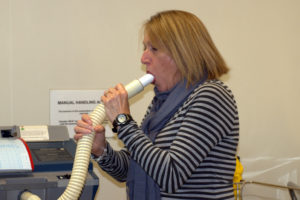 Spirometry is the most commonly used test. It is vital to confirm the diagnosis of COPD by spirometry. This test measures the amount of air you are able to breathe in and out, and how quickly you are able to breathe air out. Typically, if you have COPD, you will take longer to breathe all of your air out. Spirometry is done by breathing into a machine called a spirometer. You will be asked to take your biggest breath in and to breathe all the air out as fast as you can into the machine. This is usually done several times to get your best result and can take up to 20 minutes to complete the tests. Spirometry is often repeated after you have taken some breathing medicines (for example, Ventolin® or Bricanyl®). This is done to find out if your lung function improves with these medicines. Spirometry will be used to monitor your COPD and to check how well your treatment is working. Sometimes spirometry will also be used to monitor your COPD when you have an infection or soon afterwards.
What should I know before taking the spirometry test?
Breathing test results 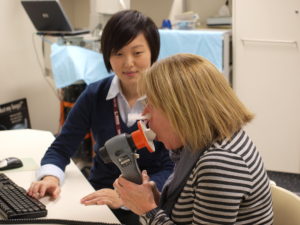 The results of these breathing tests allow your lung function to be compared with people who are like you, but who do not have lung conditions. Your breathing test results can be used to classify the severity of your lung condition and assist in tailoring appropriate treatments. Different measurements are taken to assess your lung function. The most important measures are:
What is a gas transfer measurement?
The gas transfer measurement is a test that measures how well oxygen in the air moves from your lungs across the air sacs (alveoli) and into your blood stream, and thus to your vital organs. This test is done by breathing into a mouthpiece connected to a machine. You will be asked to breathe out as much as you can, to take a large breath in, and to hold your breath for 10 seconds before breathing back into the machine. To get the best results, you will be asked to repeat the test. This test will take about 15 minutes to complete. If you are on oxygen, you will be asked to take the oxygen off for a few minutes before the test. Typically, if you have severe COPD, your results will be low when compared with people who are like you, but who do not have lung conditions. This test is used to assess the severity of lung conditions such as COPD.
What is a lung volume measurement? 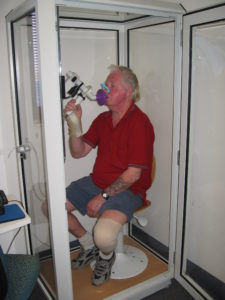 The lung volume measurement is a test that measures the amount of air in your lungs. There are three measurements, which are taken:

No matter how hard you try, when you have blown out all the air, there is still some air left in your lungs. It is this amount of air that is left in the lungs that is measured. Lung volumes are measured in a machine called a body plethysmograph, which is like a box with glass walls. This test is done in a box because very small pressure changes need to be measured while you are breathing. During the test, you will sit in the box with the door closed and breathe through a mouthpiece attached to the machine. If you suffer from claustrophobia in small spaces, let the operator know. They may ask you to attempt the test as most people can do the test even if they have claustrophobia. You will be instructed to breathe normally through the mouthpiece. However, every now and then, you will be asked to breathe against a blockage and to also breathe all the air out and then take a large breath in. The test will take approximately 10 minutes to complete. If you are on oxygen, usually you will be asked to come off the oxygen during the test. Typically, if you have COPD, your lungs will be a lot bigger than normal because of the amount of air trapped in your lungs (hyperinflation). You may need a similar test for fitness to fly called a high altitude simulated test (HAST). This is done to see if it is safe for you to fly in an aircraft.